The most important detailed experiments of this project were executed between 1985 and 1987 through support of the Austrian Endowment for Scientific Research (Fonds zur Förderung der wissenschaftlichen Forschung der Republik Österreich).

In the course of this work, a broad documentation was prepared comparing the acoustical and tonal characteristics and the playing technique of the Viennese Horn (Wiener Horn) to the worldwide standard instrument, the double horn.As a byproduct of this work, new scientific ground was broken. It became evident that many of the measurement methods used were simply not precise enough. Previously, only differences between types of instruments were tested, and not different models of the same instrument.

Therefore this work created not only new concepts but also required development of completely new measurement techniques. The following is a short overview of the Viennese F-horn's special characteristics, which are influential not only to its sound and tone color, but also require specialized playing techniques.

The tube length of the Viennese horn is about 3.7 meters from the mouthpiece to the end of the bell. With the double horn the player may choose between the 3.7meter long F-horn and the 2.7 meter Bb horn, which are switched though the thumb valve. The triple horn offers three "instruments" to choose from: the F-horn, the shorter Bb-horn, and a high horn in F, whose length is about 1.8 meters. The tube length influences energy input requirements, accuracy, and indirectly the tone color.

llustration: Schematic representation of the types of horn. From left to right: Natural horn, Viennese horn in F, double horn in F/Bb, and triple horn in F/Bb/f.

The illustration below shows the "acoustical fingerprints" of the three types of horn. These curves were created by the computer system developed at our institute, "BIAS", which automatically measures and determines the characteristics of a brass instrument.

Without going into details, it is known that a hornist can only produce a tone (a "natural" tone) whose frequency is expressed as peaks on an impedance curve. The higher the peaks, the easier it is for the musician to play the given tone. This curve shows that the least energy is needed to play the high F-horn (its peaks are highest).

The hornist playing high F-horn therefore needs to expend less energy to achieve a similar effect than with an F-horn or Bb horn.

What physically occurs as musician plays a brass instrument?

The musician must use the air current [=energy] flowing through his lips to vibrate the air column [=mass] within the instrument.

The lips function in this case as a valve. At the note a1, the lips open and close at a rate of 440 (!) times per second.Clearly, the air column of the high F-horn, with half the length of the Viennese horn, has only about half the mass. Therefore the production of a similar vibration amplitude [=volume] requires only half the energy.

In short, a musician playing the Viennese horn must blow harder to achieve a standing wave within the instrument [=volume] of similar strength to a double horn.

This applies only to the beginning of the note (the first 15-60 milliseconds) in which the vibration is constructed. Once the note is stable, the player need only replace the energy radiated from the instrument (the "sound" coming from the instrument) and that which is lost due to inner friction. 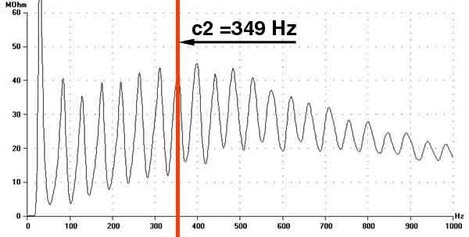 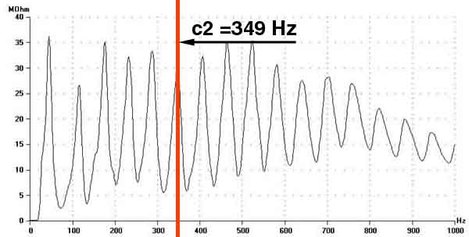 Illustration: Impedance curves of Viennese horn in F (above), Bb horn (middle), and high F-horn (below).

In practical situations, this effect is felt mainly in passages of staccato notes or high notes of short duration (for example, Verdi operas). These parts are somewhat more exacting for Viennese players.

The term Viennese horn ("Wiener Horn") is inseparably linked to double piston valves developed by the Uhlmann Company. The instrument optically and acoustically stamped by this "trademark". The problem of the "long path" has long been solved and is no longer of importance. 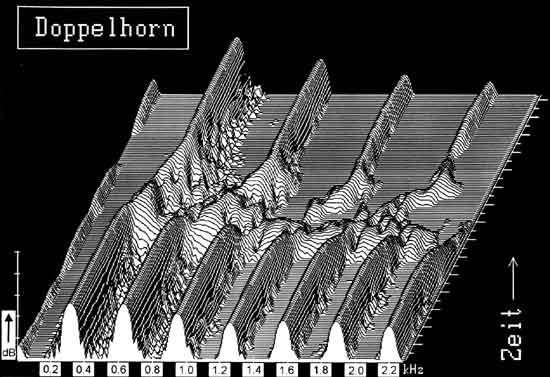 This effect lasts about 20-30 milliseconds and is perceived unconsciously by the listener. Every experienced brass player can listen to the instrument and tell without seeing it if rotary or pump (perinet) valves are used.

A special measurement with BIAS shows what causes this effect. The illustration at left shows the sound pressure situation for the player's lips in connection with the changing valve position during a slur.

The situation for the musician's lips is shown at the beginning of the slur (on the note c2) in the left foreground. Through constantly changing the tension of the lips, he arrives at the end of the slur ( b1) on the right at rear.

This is easy to achieve through the broad impedance plateau of the piston valve (at all times of the slur). The rotary valve seems to cause a collapse of the standing wave in the first third of the slur (seen as a sharp impedance valley), after which the frequency of the target note is built up again.

What is the practical significance of these findings?

The piston valve of the Viennese horn mostly produce for smooth slurs in which the notes flow into one another. Fast passages (even when played perfectly) are somewhat less brilliant and not as clear.

The rotary valve of the double horn produces smooth slurs with difficulty. The relatively abrupt changes to other frequencies has the advantage in fast passages, however, in which the clear separation of notes makes the passage easier to execute and appear more virtuosic.

While the previous experiments showed the practical differences resulting from the physical construction of valves, recent tests demonstrate that not the type, but the position of the valve section determines an instrument's tonal characteristics!

If the different types of valves are exchanged in the same position on the instrument, the resulting slur is exactly identical!!!

It was inexplicable at the time of the first experiments that the Viennese horn played most, but not all, slurs smoothly. This most recent research explains that the observed inconsistency is due to the position of the valve section.
The Bore (Inner Diameter)

The term bore means the shape of the inside diameter over the tube length of the instrument. The bore of horns is generally divisible into three sections.
Bore Shape

The first, conical section is 15-30 cm long with Viennese horns, with a diameter of between 7-9 mm.

With the double horn, the length of this section is determined by the individual instrument's construction, and the diameter begins in a range of only 7.5-8 mm. Changes within this section have little effect on the instrument's tone, but strongly effect its tuning.

The second section is exclusively cylindrical and composes about 43-48% of the Viennese horn's total length. An important difference between horn types is that the inner diameter of this section in a Viennese horn is between 10.7 and 10.8 mm (11 mm max.), whereas the double horn varies within a much larger diameter range, from 11.5 mm to 13 mm (depending on the small, medium or large size of the instrument). Differences of even a few tenths of a millimeter have an enormous influence on tone.

The third section is composed of the conically progressing bell section, which expands from the center exponentially into the bell itself. Like the second section, the bell section and bell of the Viennese horn have a narrower bore than the double horn.
Influence on Tone

Differences caused by the smaller bore of the Viennese model express themselves most of all in the tone of the instrument. These instruments produce more partials and sound generally "brighter" than a double horn (though a Viennese hornist's ideal tone is paradoxically cited as "dark" and "smooth", which should have fewer partials).

The differences in overtone richness (number of partials) is clearly shown in the following diagram.

Tonal spectrum of written c2, played fortissimo. Above: Viennese horn (55 partials), below as an extreme example the same note on the high F-horn part of a double horn, also played ff (28 partials).

Differences have also been determined between Viennese horns produced in Vienna, and those from outside of Austria (Germany and Japan). The illustration above shows the statistically calculated difference in tone, taken from the stable soundwaves of the notes g1, c2 and e2 (notated in F). It is based on material played by a total of 130 hornists.

The lines represent the decrease in higher partials in the tonal spectrum. The Viennese horn decreases least, which means that at the same volume level it has more and stronger overtones.

"Spectral Dynamics" - Tone as a Function of Sound Intensity

An important characteristic of the Viennese horn is its "spectral dynamic", that is, its range of tone color in connection with the played sound intensity can be much more than the larger bore double horn.

This effect is directly related to the smaller inner diameter of the Viennese horn and the higher friction which results within the instrument. During a crescendo to fortissimo, the higher partials climb at a higher rate than the double horn. Therefore, the musician has a larger palette of tone colors to choose from. The illustration above shows the number and rate of increase of partials in relation to the total sound intensity during a crescendo (from 84 dB to 97 dB) for all four types of horn.

Because the listener's impression of loudness is primarily a factor of tone color rather that the actual measurable sound intensity, the Viennese horn produces an impression of fortissimo with less volume level.

And due to its higher amount of overtones (at the same objective volume level) the Viennese horn is less apt to be "covered" by other orchestra instruments, and is better heard through the orchestra than a double horn played at the same dynamic level.

The special tonal characteristics and playing techniques of the Viennese horn are all connected to its construction and are summarized below.

The typical Viennese musical style is in the case of the horn a result of the instrument's construction, tradition-bound tastes, and the personality of the individual musician.